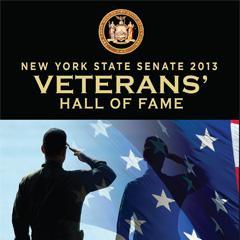 Gus Scutari is a World War II veteran who served in the Pacific from 1942 to 1946 aboard the USS Haynsworth. Fire Controlman First Class Scutari was just 24 years old when a kamikaze plane struck his ship and instantly killed 14 of his closest comrades. From that moment on, he never took his life for granted and has been tireless in his efforts on behalf of all veterans and the community at large.

Upon his release from the Navy, Gus married Fran Zorbo, and the couple eventually moved to Syosset. In 1985, the outgoing and energetic Scutari joined the Syosset Post of the Veterans of Foreign Wars and quickly worked his way up to commander. He is an active member of the American Legion Eugene S. Smith Post #175, Syosset. To ensure that young people never take the sacrifices of our soldiers for granted, Gus has spearheaded the National VFW’s local “Voice of Democracy” competition. He also represents the American Legion at an oratorical contest, challenging students to create their own patriotic speeches. In addition, Scutari runs the “Patriot’s Pen” program at Syosset’s middle schools, delivers presentations about Americanism to local Boy Scout chapters, officiates at Syosset Eagle Scout ceremonies, serves as Americanism Chairman for the Nassau County VFW, and since 1991, he has been the parade coordinator for the Syosset Memorial Day Parade.

Fire Controlman First Class Scutari has demonstrated a true and resolute allegiance to his country. He gave so much and continues to stand as a living symbol of our democracy.

Tell Governor Cuomo, NO To The North Shore Tunnel