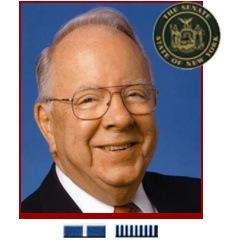 Dr. Richard Collins has devoted more than 50 years of his life to helping others during their time of need. As a Captain in the United States Army Medical Corps during the Korean War, and as a leader in his profession, he has distinguished himself with his compassion, dedication and skill.

From 1952-1953, Dr. Collins served as a medical officer with the 21st and 22nd Evacuation Hospitals in Pusan. He was transferred to Koje-do during the POW Uprising and served with the 64th Field Hospital. He also spent time as the Commanding Officer of the 543rd Medical Clearing Company. In recognition of his service, Dr. Collins was awarded the Korean Service Medal with two Bronze Stars and a United Nations Service Medal.

Upon returning home, Dr. Collins resumed his medical practice, through which he faithfully served the citizens of his community until 1994. Dr. Collins also served as the Plant Physician for the Kraft General Foods facility in Avon.

Dr. Collins is a proven leader in the New York State medical community and has helped improve the quality of health care received by millions. He is a lifetime member of the University of Rochester Board of Trustees, and also currently serves on the boards of the University of Rochester Medical Center, Strong Memorial Hospital, and Strong Partners Health System. He has been a member of the Healthcare Trustees of New York, Board of Governors since 2000, and is a past president of the Livingston County Medical Society.