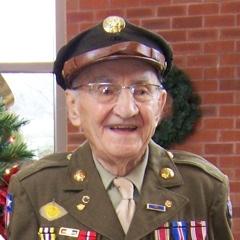 Every July 4th, Stanley Rychlicki, one of our WWII veterans puts up 13 flags o remember 13 friends he lost during the war. He still has vivid memories of battle and sacrifice. Mr. Rychlicki’s service to his country began in 1942, when he tried to enlist in the United States Marines, but did not pass the physical. Determine to serve, he volunteered for the draft in the United States Army Air Corp and began his serve on July 22, 1942. Completing basic training in Miami, Florida and Advanced Individual training Aterbury, Indiana, Mr. Rychlicki became a qualified radio operator. He was one of the original crew members of the 531st Bomber Squadron and under the 380th Bomber Group.

In 1943, an oversight kept Stanley from climbing aboard a B-24 for a practice mission. The plan went down and every day Stanley wonders how come he missed that plane ride .When he talks with school children, he tells them “The reason they d away is for you people, for you to be free: Mr. Rychlicki’s unit served in Australia and the Philippines. He participated in battles at New Guinness, Bismarck, Archipelago, North Solomon’s, Luzon, Sou Philippines and the Western Pacific.

He was aboard a B-24 that flew just ahead of the 1st Atomic bomb but never knew it. After serving a year and a half in the Pacific, Mr. Rychlicki returned to the US and continued training in Alpaca, Texas on the B-24 until his discharge on October 28, 1945 at the rank of Staff Sergeant. For his service Staff Sergeant Rychlicki was awarded the WWII Good Conduct Medal, Philippine Liberation Theater Medal, Philippine Independent Medal, and the Presidential Citation from the Philippine Government along with the Asiatic-Pacific Theater Ribbon with 7 bronze stars., Presidential Citation w/1 bronze cluster, and the WWII Victory Medal.

New York State honored him with the NYS Conspicuous Service Star and the NYS Medal for Merit. Mr. Rychlicki returned to his hometown of Natecoke, Pennsylvania and followed the family tradition and became a coal miner; however after surviving 3 near fatal accidents, he decided it was time for a change. He applied to the Atlantic Corporation and became a “Pipe Walker”. Over the next 25 years, he walked the pipeline between Philadelphia to Reading and then Reading to Wilkes-Barre, Pa. Much of his walking was in the Appalachian Mountains. After transferring to New York State, he spent the next 12 years walking the pipeline between Buffalo and Rochester.

He walked in all kinds of weather going through 5-6 pair of shoes a month, and survived elements of wild dogs, rabid fox, bears, jigger & tick bites, and even being bitten by a Copper Head Snake. Mr. Rychlicki’s “walking” consisted of over 136,800 miles and he has been recognized by the Guinness Book of Record. Following retirement in 1985, Mr. Rychlicki has maintained his walking, participating in many charitable events, volunteering at nursing homes, hospitals and schools.

He has also restored a 1985 Cadillac Fleetwood Broam which has taken many awards at car shows. Students at Caledonia-Mumford School made it possible-through holding fundraisers -for Mr. Rychlicki to participate in the honor flight to the WWII memorial in Washington, DC. He was also chosen as one of 100 veterans to be recognized at a Buffalo Bills Football game. In 2010, Mr. Rychlicki and his wife Rosemary will be celebrating 63 years of marriage. They had four children, a daughter, Gloria (deceased) and three sons, Arnold, Joseph and Stanley Jr.