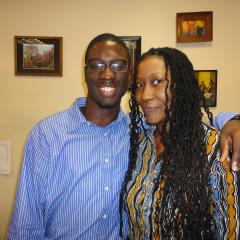 Vivia Morgan and her son, Shawn Negus Clark, are the driving force behind Friends of Wingate Park, a volunteer group with a mission to enlighten youth on ways to help the environment while keeping the park and neighborhood clean.

Vivia, a native of Jamaica, West Indies, has worked in the Mayor’s Office of Film, Theater and Broadcasting, where she learned the “ins and outs” of production.  A peek at her resume reveals work with notable professionals on movies such as Ransom, directed by Ron Howard, and Howard Stern’s Private Parts; various videos for LL Cool J and Biggie Smalls; and appearances on various television shows, including Fox TV’s New York Undercover.  Near and dear to her heart, however, are community events such as the African Street Festival, and participating in Community Board Meetings to fight for improvements in the community.

Shawn, a 19-year-old freshman at Medgar Evers College, is a critical thinker who is very concerned about the economy and its impact on his community.  He recently served as campaign manager for his mother’s run for New York State Senate as the Anti-Prohibition candidate.   Through Friends of Wingate Park, he helps to organize safe activities for the youth of the community.

Friends of Wingate Park believes that our community will become stronger when neighbors work together through joint public civic activities.  In addition, the organization encourages unions to hire young people into apprenticeship programs; provides information about HIV/AIDS and general healthcare; and unites neighbors through positive, non-political, non-denominational community events, such as the recently held Thanksgiving Dinner for seniors, Halloween Event for children, and Wingate Park “It’s My Park” Day.

Statement from Senator Adams on the passing of Honorable Nelson Mandela