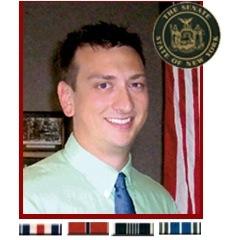 David Bellavia has distinguished himself through both his profound leadership on the battlefields of Iraq and his compassionate and dedicated efforts to build public support for his fellow soldiers.

Mr. Bellavia, a Staff Sergeant in the United States Army, has been nominated for the Congressional Medal of Honor, the nation’s highest military award, for his extraordinary conduct during the battle for Al Fallujah. On November 10, 2004, Mr. Bellavia’s 29th birthday, his platoon was taking direct fire from pointblank range while battling for a structure in the war-torn city. Through desperate fighting in austere conditions, Mr. Bellavia engaged and destroyed five enemy combatants, alleviating the clear and present danger they posed to members of his platoon. Later in the battle, with ammunition scarce, Mr. Bellavia again distinguished himself by leading his men to victory in close hand-to-hand combat.

Since returning from Iraq, Mr. Bellavia has dedicated himself to galvanizing support for the military personnel still fighting in Iraq and encouraging expansion of veteran service programs to better serve the current generation of American heroes.