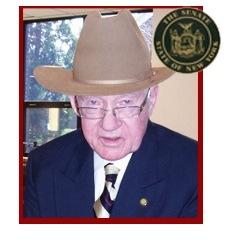 Robert Laskaris (Retired Sergeant First Class, United States Army) is a highly decorated combat veteran whose service spanned more than 20 years and encompassed the wars in Korea and Vietnam prior to his retirement from the Army in 1972.

Bob was born in Elmira, New York on April 22, 1928, and grew up on Elmira’s Southside, where he attended the old Riverside Elementary School. Upon his graduation from Elmira Free Academy, he joined the United States Army Reserves in 1948 and joined the Army full-time following the outbreak of the Korean War. He served in Korea and Vietnam and retired as a Sergeant First Class in 1972.

Returning to his native Elmira following his retirement from the Army, Bob became active in local veterans affairs and has worked tirelessly across the ensuing decades on behalf of area veterans. He played a key role in the reopening of the Woodlawn National Cemetery and spearheaded numerous other local veterans achievements, including the creation of the Veterans Memorial Park section within the city of Elmira’s Wisner Park. He was long recognized as the community’s “point man” in coordinating Veterans Day and Memorial Day observances.

Robert Laskaris is admired for his steadfastness in a long-standing commitment to the needs and concerns of local veterans. He’s widely acknowledged and honored as a “veteran’s veteran” whose service to his hometown, the State of New York and the United States of America is unmatched.