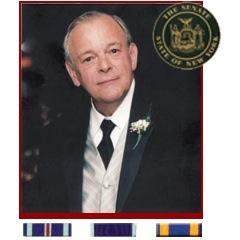 William K. Kastner distinguished himself while serving in the United States Air Force from 1960 to 1980 — service that included a combat tour of duty in Vietnam where he was seriously wounded while serving as an intelligence observer on an 0-2B aircraft.

Despite his injuries, Mr. Kastner continued to relay intelligence to friendly forces that proved vital in the conflict. In recognition of his gallant actions, he was presented with the Distinguished Flying Cross for Heroism, the Purple Heart and a second Air Medal for his actions. He is one of only two Security Policeman in Air Force history who have received the Distinguished Flying Cross.

Following his Air Force career, Mr. Kastner returned to his native Steuben County to begin a career as Director of the Steuben County Veterans Service Agency. Under Mr. Kastner’s leadership from 1981 to 2003, the agency received local, state and national recognition for efficiency, expertise and professionalism and earned the prestigious “George Washington Honor Medal.”

William K. Kastner has always been a doer and a dreamer, and his lifelong commitment to the welfare and well-being of area veterans is revered. He is deserving of a special place among the elite veterans of the Empire State.