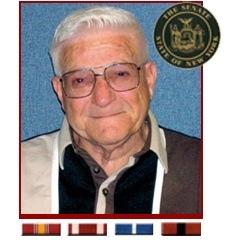 Nicholas Zingaro served his country for more than 35 years as a member of the United States Marine Corps, transcending World War II, the Korean War, and Vietnam.

After completing his training in 1944, Mr. Zingaro was transferred to the 4th Marine Division, where he served as a machine gunner in Charlie Company 1st Battalion, 23rd Marines. During WW II, Mr. Zingaro took part in the pivotal invasion of Iwo Jima and was later stationed in Okinawa as a member of the 1st Battalion, 7th Marines Headquarters Company, 1st Marine Division. Upon being discharged in 1947, he joined the Marine Corps Reserve. In August 1950, he was activated for the Korean War. When the war ended, he became an instructor on Cold Weather operations as part of the Training Battalion in Bridgeport, California. He was promoted to Sergeant Major in April 1970.

Since his retirement from active duty, Mr. Zingaro has remained active in the Marine Corps League, American Legion Post 41, VFW Post 2893, and the DAV.

My 14th and Final Senior Fair

You May have Unclaimed Funds