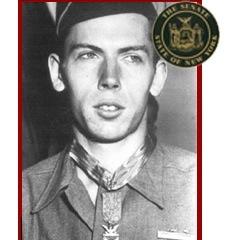 Honored throughout the country for his gallant actions during World War II, Congressional Medal of Honor recipient Francis S. Currey is a true American hero and deserving of a special place among the elite veterans of the Empire State.

Born on June 29, 1925 in Loch Sheldrake, Mr. Currey was raised in Hurleyville by his foster parents. Joining the United States Army just one week after graduating from the local high school, Mr. Currey was deployed to Europe in 1943. In December 1944, the United States and its allies were winning the war in Europe. But in a last desperate struggle, the German army launched an offensive in the Ardennes region of Belgium by driving a wedge into American lines. The savage fighting that ensued became known as the Battle of the Bulge.

An automatic rifleman with Company K, 120th Infantry, 30th Infantry Division, Sergeant Currey, only 19 years old at the time, and his platoon of 30 men were assigned to defend the small Belgian town of Malmedy with little more than small arms. Facing a column of German tanks intent on flanking his battalion, Currey repeatedly braved enemy fire to inflict heavy losses on the enemy, rescue five American soldiers that had been pinned down, and thwarted the enemy advance.

2018 Annual Report of the Senate Committee on Racing, Gaming and Wagering

Senator Bonacic Announces $50,000 Grant for The Village of Ellenville

Blueprint for a Stronger New York