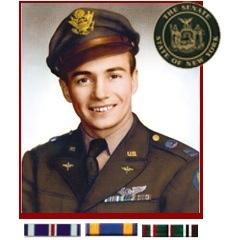 Arthur M. Cromarty of Lindenhurst served his country with distinction as a Captain in the United States Army during World War II.

A graduate of the University of Alabama, CPT Cromarty was trained at Mitchell Field before being deployed to England. When formations were made, he served as lead bombardier — responsible for dropping the first bomb during missions, giving cue to the other bombardiers who would follow.

CPT Cromarty went on to complete 30 combat missions over Germany and France for which he earned the Distinguished Flying Cross and the Air Medal, which is awarded to members of the armed forces who distinguish themselves for heroism or extraordinary achievement while participating in an aerial flight.

Among the battles and campaigns in which CPT Cromarty took part are the European Theater, Air Offensive Europe, Normandy and Northern France. He earned the European, African and Middle Eastern Theater Campaign Ribbon and the European Theater of Operation Medal with three Bronze Battle Stars. In 1994, he was awarded the Jubilee Medal from the President of the Regional Council of Lower Normandy, which commemorated the Fiftieth Anniversary of the Normandy Landing and Battle of Normandy.