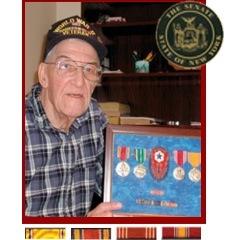 Floyd Fisher, having distinguished himself with acts of uncommon valor and gallantry on the battlefield during WW II and decades of tireless service to his community, has earned a place among the elite veterans in New York State history.

Mr. Fisher was a member of the United States Army from 1943 to 1946 and rose to the rank of Master Sergeant. He served during World War II in the Office of Strategic Services (OSS), the precursor to the Central Intelligence Agency. The OSS played a key role in defeating our enemies in World War II. Mr. Fisher, true to his OSS oath of silence, remained reticent about his secret missions during the war. However, he once said simply and modestly that he landed on the beach, D-Day plus six hours.

In recognition of Mr. Fisher’s heroic efforts, he was presented with the World War II Medal, two European Theater of Operations Awards, the Good Conduct Ribbon, and the American Defense Ribbon.

In Mr. Fisher’s civilian life, he served as a Baptist Minister for 40 years and served as an Administrator of the Putnam County Veterans’ Residence. He was a past President of the Kent Historical Society and wrote a book entitled, They All Rest Together, a catalogue of all those buried in Putnam County. The county also commissioned him to create a map of the cemeteries in Putnam County with historical significance.