Has Mayoral Control of New York City schools been a good thing?Should it be ended? Can it be fixed?

These questions were the focus of a discussion between local elected officials and education advocates, teachers and parents held on October 8, 2013 at St. Francis College's Founders Hall in Brooklyn Heights. The event was a Legislative Hearing called by NYS Senator Velmanette Montgomery, NYS Senator Bill Perkins, and NYS Assemblyman David Weprin. The three elected officials are sponsoring a bill in the State Legislature that would make significant changes to the NYC Board of Education and replace the absolute control currently enjoyed by the Mayor with a more collaborative structure that, the bill intends, would be more transparent, professional, and responsive and would have an effective set of checks and balances.

Over 30 individuals from all five boroughs of New York City offered testimony at the hearing. Parents and children’s education advocates including members of local Community Education Councils were joined by representatives of the NAACP, the NYC Parent’s Union, the Coalition for Educational Justice, United Federation of Teachers and Santos Crespo, Jr., the president of DC37 Local 372 who said “Parents have and will always be the linchpin to a good educational system. Part of the reason Bloomberg’s educational policy failed is because he completely ignored parents.” NYC Councilman Robert Jackson, chair of the Committee on Education echoed these concerns: “The Council’s Working Group and all of the other reports that were issued identified the same core problems under Mayoral Control—a lack of transparency, lack of accountability, lack of checks and balances, and a lack of parent and community involvement.”

But the question of how to best address these problems brought a variety of responses. While most speakers felt that the current system had been highly destructive to a generation of public school students and that the proposed legislation needs to be put into effect immediately, some speakers rose to suggest modifications to the proposal. Many felt that parents had been marginalized and isolated from participation in their children’s education, and called for the empowerment of the local Community Education Councils as the first line of participation for school parents. They applauded the proposed Bill’s call for educational qualifications and parental representation on the reconstituted Board, but suggested that one of the members be a parent of a special needs student.

Assemblyman David Weprin, carrying the Bill in the State Assembly, said," As the son of a teacher, I remain committed to ensuring our children receive a quality education. Under mayoral control, we have seen far too many schools experience co-locations and close down that ultimately has led to a spiral of academic decline for the public school system..”

Senator Montgomery cautioned that while the Hearing had been very productive and the comments had been "...extremely valuable" that  "This is just the beginning of the process, and we need your help. Your voices, the voices of the parents, students, and advocates are what will make all the difference. We will have a new Mayor, a mostly new City Council, and next year a new Legislature. Now is the time to move on this."

Senator Bill Perkins urged people to make their opinions heard by Governor Cuomo. "Any changes to Mayoral Control will have to be enacted at the State level, and they will most definitely need the support of Governor Cuomo. Speak up! He is listening!"

Everyone agreed that something has to be done immediately. While the current authorization of Mayoral Control doesn't expire until June 2015, leaving some time for fine tuning the legislation, most agreed that the sooner a new system as proposed is put in place, the better. 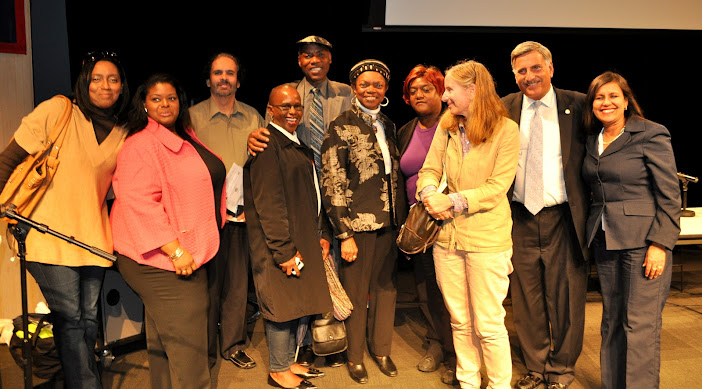